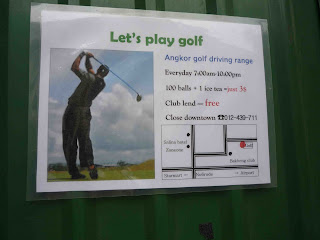 There is a driving range some 3.5km from our house. It costs USD3 for 100 balls and you get a free iced-tea thrown in. I don't play but Alan does (he's a Scot, after all!). Alan even went for the first Johnnie Walker Cambodian Open, held in Siem Reap in November last year (the second one will be held this year from Dec11-14). I have to get the photos from him and show readers what the golf course looks like. 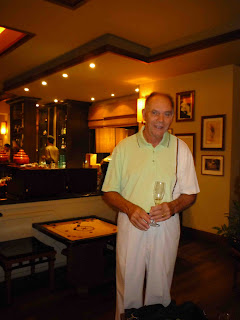 This is Tim Ireland, the man behind Ultimate Golf Challenge, one of Australia’s largest golf tour operators, which helped organised Cambodia’s first pro-am tournament for Australian amateurs and professional golfers. I covered the event in October for AsiaLIFE magazine. It is such a small world, Alan actually knows Tim from Singapore. Tim was a golf coach and they would practise at the Bukit Batok Driving Range in Singapore. We had an interesting time catching up with Tim who is lucky to be doing something he loves and making a living from it. 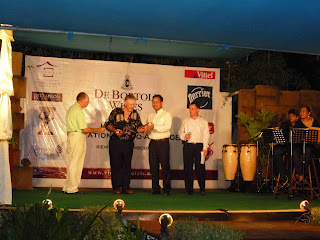 The pro-am event saw 52 Australian seniors and club pros fly in especially to Cambodia. They played on the new Nick Faldo-designed course, the Angkor Golf Resort, here in Siem Reap. The Cambodia leg is part of the Indochina International Circuit which includes two pro-am events in Vietnam. The golfers play for a total prize of USD 33,000 cash. Here are the golfers receiving their prizes at the Victoria Angkor Resort and Spa, which put up the golfers. 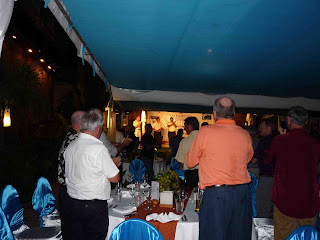 Here everyone is standing up for the national anthem of Cambodia. The Aussies then broke into a spontaneous rendition of their national anthem, "Waltzing Mathilda". I don't know what Cambodia's anthem is called, but you can watch the full 2 and 21 minute here on youtube.
Posted by Diana Saw at 2:59 pm