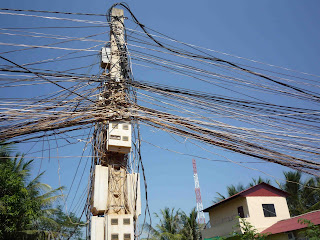 We had a blackout at around 2am one day. We noticed it because the fan went off. We expected to get the electricity back soon, as unlike Phnom Penh, power cuts in Siem Reap rarely last more than half an hour. But we did not get power back even in the morning. At 8am, the landlord came round, telling us someone had stolen the cable to our house. The photo shows the power cables that provide electrical current to the houses in our neighbourhood. Any one of those could be ours!

Anyway, our poor landlord had to pay USD200 to replace the cable. He wasn't particularly fazed. Just said matter of factly the cable was stolen, as does happen in this country and off he went to buy new wire.

Electricity costs in Cambodia are among the highest in the world, and only about 15 percent of the country's 14 million people are connected to the power grid, according to the World Bank.

I found this report that noted in 2003, Cambodia's electricity costs was second only to Japan in the Asian region.

"The Philippines ranked fifth in terms of having the most expensive electricity in the Asian region at US cents 9.17 per kWh in 2003. Japan, as the most expensive, was followed by Cambodia, Hongkong and Vietnam."

Here in Siem Reap, we pay 820 riels or 20.5 US cents per kilowatt hour. Our monthly bill for a house with a small fridge, TV, computer, hot water heater and fans (we hardly ever use the air-con) is USD65. In Phnom Penh, we paid "foreigner rates" (about 10% higher) of 870 riels or 21.75 US cents per kwh. The good thing about Siem Reap is there does not seem to be a foreigner rate.

Cambodia's industrial electricity rates are also very high, and it is one of the reasons cited by companies who choose to invest in places other than Cambodia. This 2004 article reporting data collated by the Jakarta-based Asean Centre for Energy shows exactly how high Cambodian rates are vis-a-vis other ASEAN countries:

Philippines should have Asia's cheapest electricity. It has the world's second largest geothermal capacity.

We just received an electric bill for USD300 for last month. We are charged .28 per kwh. We believe we're being ripped off by someone in the building because we are foreigners and many friends here have told us that often times foreigners will unknowingly be paying for many people's electricity in their residence. We hate to be that suspicious, but we were away a lot of last month and left everything turned off. I'm not sure what we can do to dispute it without causing problems with management.

No, you're not being paranoid. It has happened to people I know who lived in Phnom Penh. We were also suspicious when we first moved to Siem Reap and made the landlord check if someone was tapping into our electrical supply. The best advice I can give is to ask the landlord to install a meter or counter so you can see exactly how much you use. Not that this is full-proof: since installing a new meter in the Bloom shop at the Russian market, the counter jumps twice as fast and now I have to pay twice as much. We tried disputing with the electricity company people who come to collect the money but it hasn't got us anywhere. Good luck!