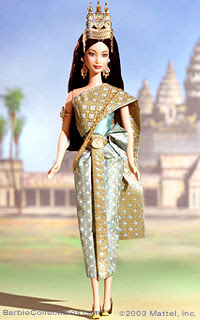 I just stumbled upon this: Princess of Cambodia™ Barbie® 2004 Collector Edition

Princess of Cambodia™ Barbie® Doll wears a slim silhouetted skirt that is fashioned from teal fabric that wraps around her, cinches at her waist, and drapes over her shoulder. The wrap, which features a golden geometric floral print, comes together in a vertical layer of pleats in front. A golden braided belt secures the wrap at her waist and features a golden buckle.She has long dark brown hair which cascades down from beneath her royal crown with faux sapphires and emeralds. Her outfit is accented by many golden elements including dangling earrings, an intricate armband, a braided golden sash, and golden shoes. For ages 3+.

The doll's outfit does look very similar to the Apsara dancer's I saw yesterday. Even the head dress looks like the real thing. Check out the picture of Angkor Wat behind the princess.

Googling "Mattel in Cambodia" turned up this blog entry by Anne Elizabeth Moore, an author and activist in Cambodia:

I told them about Mattel, and we did some little bit of math: at the garment factories here, you can earn about $45 per month. An average doll, book, pet, clothing, and furniture starter set from American Girl Place [another doll made by Mattel] costs $1000. If you go without food, health care, and entertainment for two and a half years working in a garment factory here, under similar conditions as the workers have when producing Mattel products—6 days per week, eight hour days--but do not take any overtime, you will work for around two and a half years before you can save up enough money to buy the starter kit. And if you produce ten dolls per hour (I have no idea how many dolls one can produce in an hour, but let’s just say ten), in that same time period you will have produced nearly 2000 dolls.

“It is sadly,” ChanNy said after a long, long silence.

Anne Elizabeth does point out Mattel has no factories in Cambodia and this is just an example. Mattel's toys are made primarily in China and some in Indonesia (it shut its last American factory in 2002). Mattel is not the worst company to work for. According to this New York Times article:

"In the 1990s, critics charged the company with running sweatshops in Asia. Now, independent analysts, and even watchdog groups, say Mattel may be the best role model for how to operate prudently in China....

"Mattel was one of only two major toy makers that agreed to allow a reporter for The New York Times to visit one of its factories in China — or even to put an executive on the phone to discuss the issue of Chinese product safety. Hasbro, LeapFrog and Zizzle — the maker of Pirates of the Caribbean toys, among others — all declined requests. Lego does not manufacture in China, but it declined a request to visit factories elsewhere. Aside from Mattel, only MEGA Brands of Canada said it would permit a visit."

In 2007, Mattel recalled 18.2 million items from factories in China.

Cheung Shu-hung, a Hong Kong businessman in his 50s and co-owner of the Lee Der Toy Company, which had made a number of toys for Mattel, committed suicide by hanging himself at one of his company's factories, after paying salaries due to all employees and sending them home. The factory had been producing toys to Mattel for more than 10 years without any bad records before this incident bankrupted it.

This reminds me of an Englishman who told me he had built a factory after getting a contract to supply to one of UK's biggest supermarket chains. Two years later, the supermarket chain found a cheaper supplier, so the poor guy was stuck with a big factory with no orders. He had not yet recoup the investment of the the factory.

It's not a good idea to rely on a couple of big clients for business. I'd rather Bloom supplied to dozens of smaller outfits, even though it takes more effort (forget the 80-20 rule) and build good relations with them, thereby spreading our risk.
Posted by Diana Saw at 12:56 pm