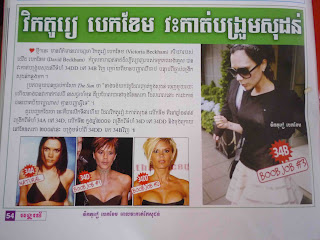 I was surprised when Thyda, a Khmer friend, excitedly told me yesterday "You know the singer, Michael Jackson? He is dead!"

I always switch on the TV to watch the news when I wake up so had already known. I'm not a big fan of MJ's songs, although I liked the Thriller MTV because I like zombies and zombie movies. The coverage of MJ's death reminded me of Princess Diana's.

So I asked Thyda and her friend how many people in Cambodia know Michael Jackson. They say, many, many. It turns out it's not for his music that MJ is known in Cambodia; it is for his plastic surgery.

Thyda, for instance, has known about MJ for more than 10 years, she says, because he is always in the Cambodian magazines. His nose, his skin has been featured numerous times.

The photo shows a page I took from the Cambodian magazine, "Angkor Thom", which hit newsstands just yesterday. The article follows Victoria Beckham's boob jobs. The main pic says she has gone for a breast reduction, from 34DD to 34B.

Cambodia is not beyond the reaches of Hollywood.

Update: I just spoke to Chhun Hy and he told me he knows who Michael Jackson is. He asked me if MJ is rich and I said yes, but he was also lonely. Chhun Hy asked why and I said maybe everyone wanted his money or maybe it has to do with the fact he looks strange, always changing his nose, chin and whitening his skin. Chhun Hy was amazed. He said, "You are saying before he is black man?"
Posted by Diana Saw at 12:45 pm