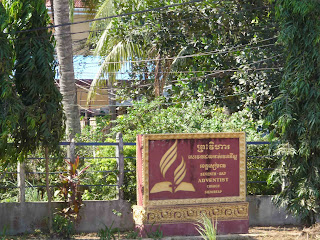 I just read this New York Times article which reports on Mormon missionaries becoming door-to-door sales people. “It’s missionary work turned into a business,” said Cameron Treu, 30, who served his mission in Chile and was recruited into D2D (that is door-to-door in sales lingo) by another former missionary.

I was told the Mormon church (also known as the Church of the Latter Day Saints) is the largest church in Phnom Penh. It was given permission to set up in 1994. There is also one in Siem Reap, along National Road No. 6 (pictured).

This 2008 news report describes how the church was partnering with the Center for Study and Development of Cambodian Agriculture (CEDAC), an NGO in Cambodia, to improve the lives of 7,000 families. The article says "The 'Academy Performers' tell the audience members they are sponsored by LDS (Latter Day Saints) Charities, but do not proselytise."

Hard to believe. Here is a first person account of the Church's missionary work. "Mike and Mary Lee Morgan are on an 18-month assignment in the Cambodia Phnom Penh Mission of the Church of Jesus Christ of Latter-Day Saints. They have been assigned to do both proselyting [sic] and humanitarian services for the Cambodian people. (My italics).

In Phnom Penh, I actually got to know 3 young women, all Mormons from Utah, who came to the Bloom cafe frequently. It took them a while before they started their evangelising, but anyone could see that was why they were there.

The women, in their early twenties, were often accompanied by a young ethnic Vietnamese woman who was born in Cambodia. They seemed nice enough, and told me they had all worked for a year to save money to do their missionary work in Cambodia. They led a very strict regime and were not allowed to surf the Internet except for an hour on Tuesdays. Phone calls, too, were restricted. The women used to ride their bicycles from the Russian Market to the cafe and one of them told me she learnt how to bargain with vendors in the Russian market who often quoted her ridiculously high prices. "Knyom ot cher-koot teh!" ("I'm not crazy!"), she would say, which really made me laugh.

In 2003, the Ministry of Cults and Religion issued a new "disciplinary order" regulating the activities of "outside religions."

When I first arrived in Cambodia, I met a young man, Saveth, who was learning English at New Life, a centre near our house. I wonder if New Life in Cambodia is related to New Life Church, the Colorado church founded by the evangelical preacher Ted Haggard, who in 2006 admitted, after initial denials, to soliciting prostitute Mike Jones for homosexual sex and methamphetamine.

Saveth became a fervent Christian and used to run down Buddhism and tell me about the sex crimes perpetrated by his country's monks. He had no idea about Ted Haggard though.

This is what is found on the homepage of cambodianewlife.org:

Our primary focus is to train nationals to reach Cambodians for Christ. How do we do that? Click on the link to our ministries [which include "college", "radio", and "women"]. New Life Missions is working with many different Church denominations in Cambodia and some in the United States. The ultimate purpose of this mission is a life-long commitment to serve the World Church. Our method both in practice and principle has been designed in such a way that New Life Mission becomes all things to all people. To the wise we become fools. To the fools we become light. New Life Missions is the gateway to world vision. If it's not a "mission," it's not a "Church".

At least New Life is honest about why they are in Cambodia.

This other website describes New Life as "a church dedicated to raising up leaders with in the body and sending them out to surrounding provinces to plant more churches. Currently New Life has over 60 church plants spread through out the country of Cambodia with plans to move into surrounding countries such as Vietnam and Laos."

I've met many Westerners here who tell me they are "church planters" or more often, their husbands are church planters. I'd never heard of the term until I got to Cambodia.
Posted by Diana Saw at 11:28 am