Giant jellyfish taking over the oceans 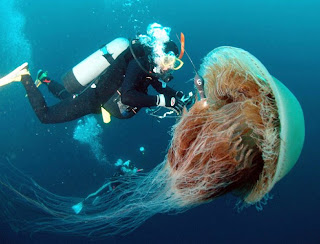 Giant jellyfish like this one are taking over parts of the world's oceans as overfishing and other human activities open windows of opportunity for them to prosper, say researchers. They say climate change could also cause jellyfish populations to grow. The team believes that for the first time, water conditions could lead to what they call a "jellyfish stable state," in which jellyfish rule the oceans. Jellyfish numbers are increasing in Southeast Asia, the Black Sea, the Gulf of Mexico and the North Sea.

Jellyfish are awesome. In this January article by The Telegraph:

Marine biologists say the jellyfish numbers are rocketing because they need not die. Turritopsis Nutricula is technically known as a hydrozoan and is the only known animal that is capable of reverting completely to its younger self. It does this through the cell development process of transdifferentiation. Scientists believe the cycle can repeat indefinitely, rendering it potentially immortal. While most members of the jellyfish family usually die after propagating, the Turritopsis nutricula has developed the unique ability to return to a polyp state. Having stumbled upon the font of eternal youth, this tiny creature which is just 5mm long is the focus of many intricate studies by marine biologists and geneticists to see exactly how it manages to literally reverse its aging process.

And then there is this March report by the Brisbane Times which said:

A ghostly white jellyfish the size of a 10 cent piece could be the secret weapon in the fight against dengue fever, a Tasmanian biologist believes. Launceston-based researcher Dr Lisa Gershwin believes a species of mosquito-munching jellyfish may be the key to keeping numbers down. The freshwater Craspedacusta sowerbyi can live in small bodies of water and have a taste for mosquito larvae.

You may be interested to learn about jellyfish stings in Thailand. As for cures, someone on the travel site travelfish.org says: "Cures for jellyfish stings include vinegar and peeing on the sting (no I'm not kidding!) Vinegar works better though. ;-) Also have seen honey applied and that seemed to work very well too. It's something to do with altering the pH and preventing the nematocysts from releasing the venom. Never wash the stung area with fresh water as it makes the symptoms worse."
Posted by Diana Saw at 11:57 am